A pianist, a vibraphonist, a composer and an arranger; a graduate of the Jazz and Popular Music Department of the Academy of Music in Katowice, majoring in instruments, and composition and arrangement. In 2007, he completed a master study course at Hochschule für Musik in Nuremberg, in the class of American composer Bill Molenhof. In 2011, he obtained the Doctor of Musical Arts degree at the Ignacy Jan Paderewski Academy of Music in Poznań. Since 2011, he has been lecturing at the Stanisław Moniuszko Academy of Music in Gdańsk. He is a laureate of numerous international competitions. He won the first prize in the “G.B. Pergolesi” competition for composers in Italy, the Duke Ellington arrangement competition in Germany, and the Grand Prix of the Jazz on the Oder Festival.

Jan Freicher is an author of more than fifty compositions of varied texture (solo, chamber, symphonic compositions, composition for big band and choir). He has written music for film and theatre productions, as well as pop, cabaret songs and other. He has cooperated with the National Higher School of Film, Television and Theatre in Łódź, ITP Theatre in Lublin, Teatro Panoptikum in Winterthur, Switzerland, among other theatres. His artistic achievements include 16 recorded albums, as well as a musical score publication issued by the US publishing house HoneyRock. He leads his own bands Fourth Floor and Symphonic Fusion, and cooperates with many other bands and singers. He has performed at numerous international festivals, including Vibraphonie Zürich, Jazzwelten Dresden, Bayerisches Jazzweekend, Jazztage Görlitz, International de Musique Universitaire Belfort, Jazz Forum Festival, Warsaw Gospel Days, Bielska Zadymka Jazzowa, Vena Music Festival, Drum Fest, Summer Jazz Festival Pinneberg. He gives many concerts in such countries as Poland, Germany, Switzerland, the Netherlands, Belgium, the Czech Republic, France, Italy, Latvia, Estonia. 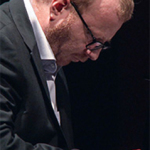 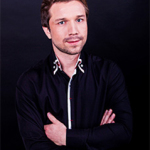 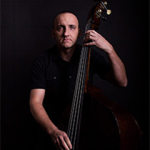